What kind of investment returns can we expect on fixed income and stocks as of November 2020? 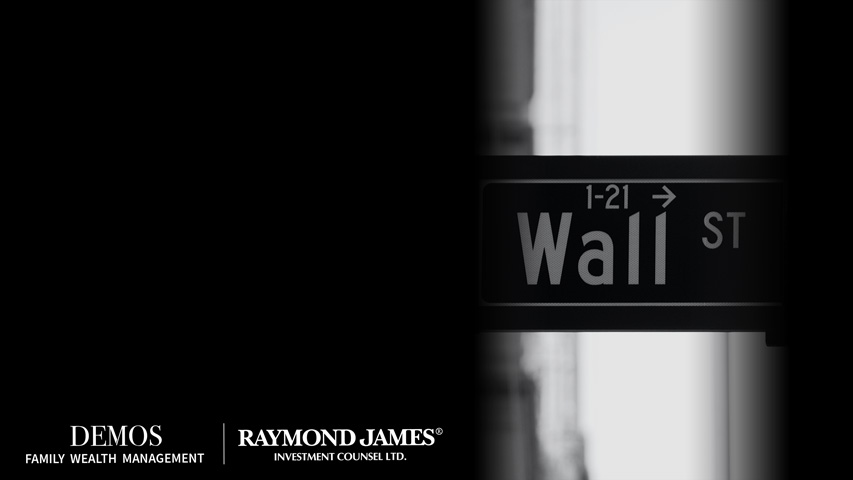 To be realistic, we should expect over the next few years an annual return of around 1% from fixed income securities and an average annual return of between 4% and 5% from equities with a probable marked drop in their value in the short or medium term. 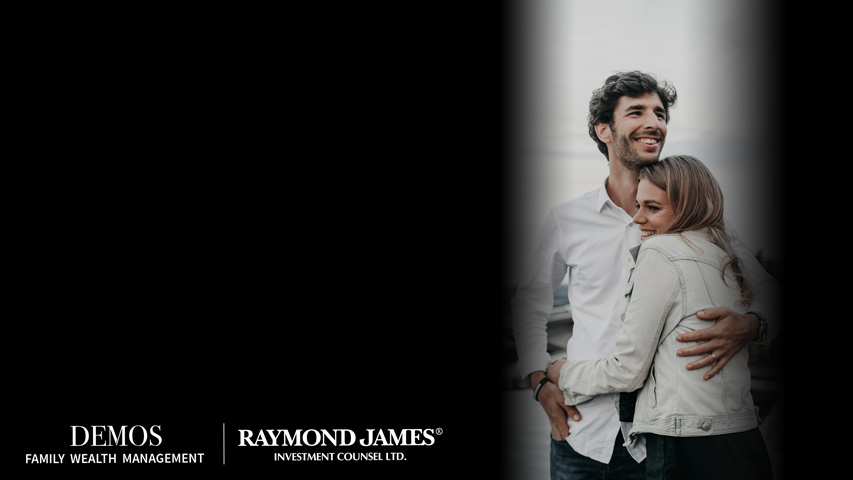 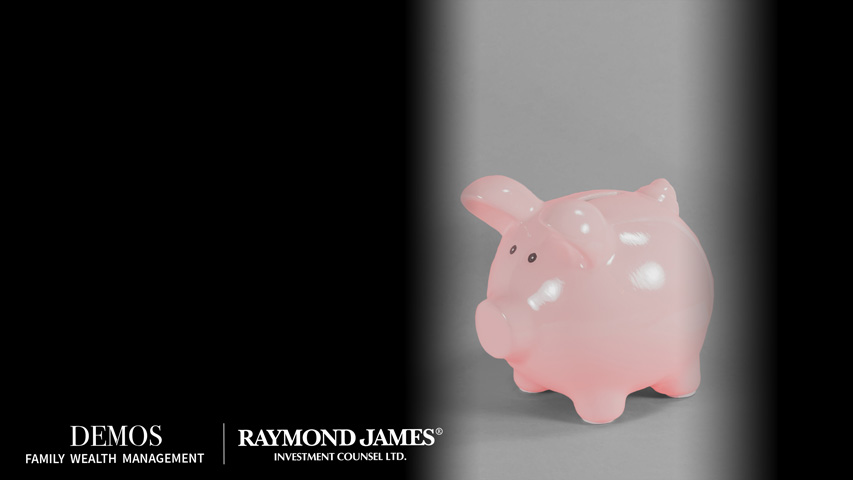 Let’s start by addressing the event that the whole world has been talking about for several months: the American elections. Despite tighter results than many expected, the market did not experience any drastic movement following Joe Biden’s victory. Some feared that a Democratic victory could have caused the market to fall due to their intention to raise corporate taxes, while others believed the stock market would rise due to their more generous stimulus package. Regardless, the market recovered from the losses it had suffered in the weeks leading up to the election. As for the House of Representatives, it retained a majority of Democratic seats and we are still awaiting the official result of the Senate. We will be keeping an eye on this outcome and the impact it will have on the markets.

In recent weeks, apart from the US elections, the stock market has experienced a period of rise following the announcements of potential vaccines from Pfizer and Moderna. The markets have also experienced a transition from "growth" stocks, which have had enormous success in recent years, to "value" stocks which have been more neglected during the same period. Indeed, the announcement of potential vaccines seems to have given investors hope for the industries that had been particularly affected by COVID-19. However, this recent increase has been reversed in recent days as despite the hope of a vaccine, the number of cases and hospitalizations worldwide remains worrying and many companies are still suffering serious consequences.

We believe that despite the potential increase in the market that a of a vaccine could generate in the short term, such a high market valuation cannot be sustained in the medium or long term. We therefore believe that the divergence between the price of financial assets and their fundamental values cannot be eternal. One day or another, profits will have to rise to justify current prices or, conversely, the stock market will have to experience a sharp correction. This is why we prioritize fundamental analysis and the selection of individual stocks, well positioned to face the many challenges posed by COVID-19.

Below are our findings for the month of November regarding the returns to be expected from fixed income investments and stocks. 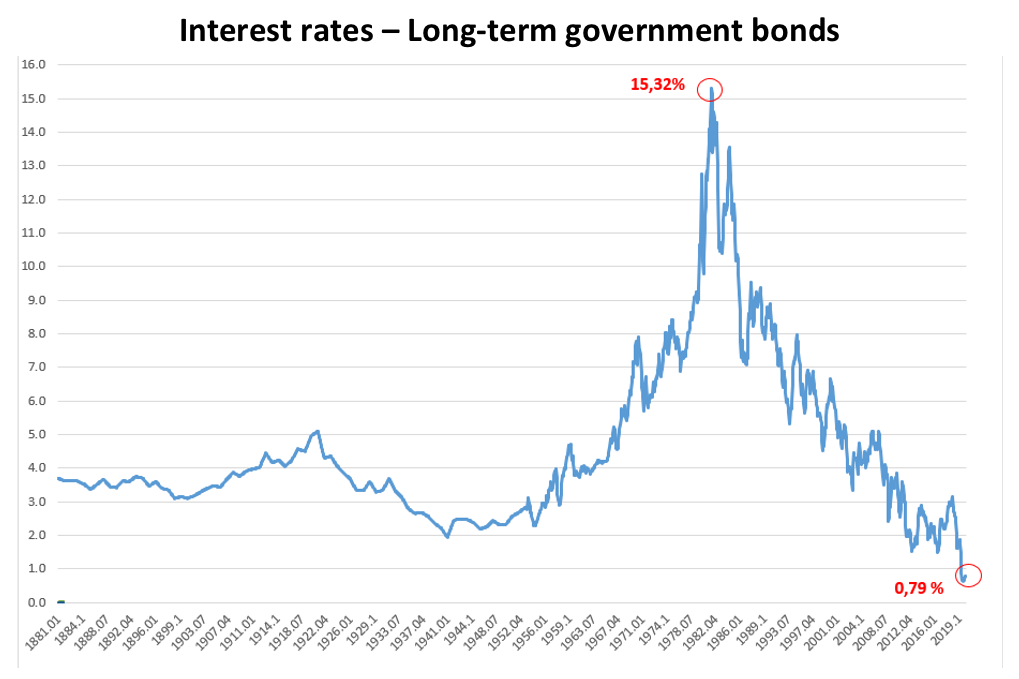 Now let's move on to provincial bonds. Here are the returns for a 1 to 10-year laddered bond portfolio. The yield increased slightly from last month, from 0.88% to 0.97%.

So, again, we should expect a return of roughly 1% for the next several years from secure fixed income...

The price paid for publicly traded companies, according to the Shiller ratio, is currently at 31.96 times their profits. The ratio has increased since last month, when it stood at 30.79. This increase can be explained by the rise of the S&P 500 index on the stock market without seeing the profits of the companies that compose the index following the same trend .The market was only as expensive as it was in 1929 and 1999, two periods followed by a sharp correction.

Price paid per one dollar of profit (Shiller PE ratio) 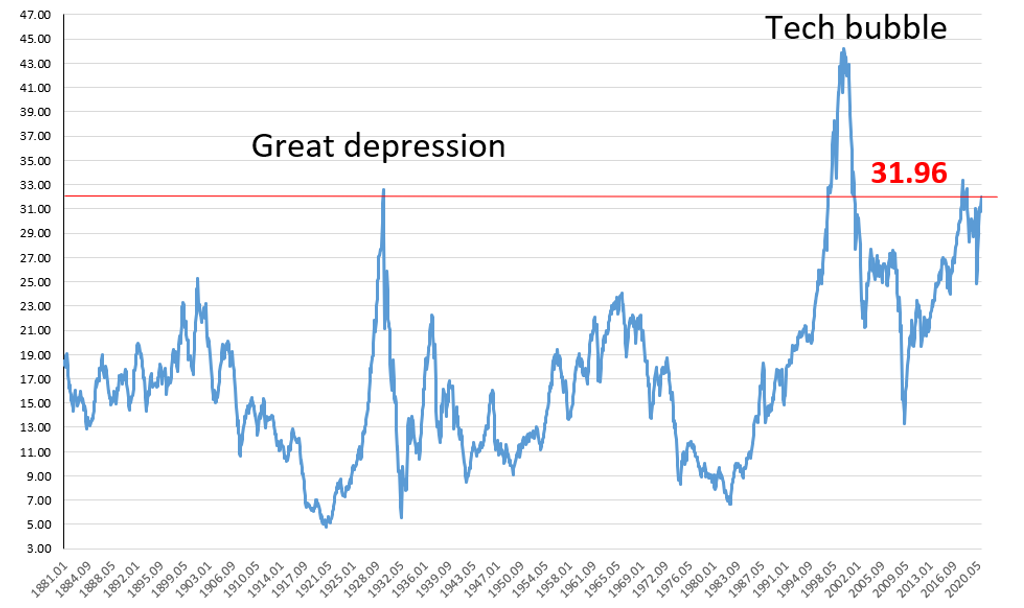 Let’s now take a look at the return achieved by investors during the 15 years that followed such a high valuation of the stock market in the past. 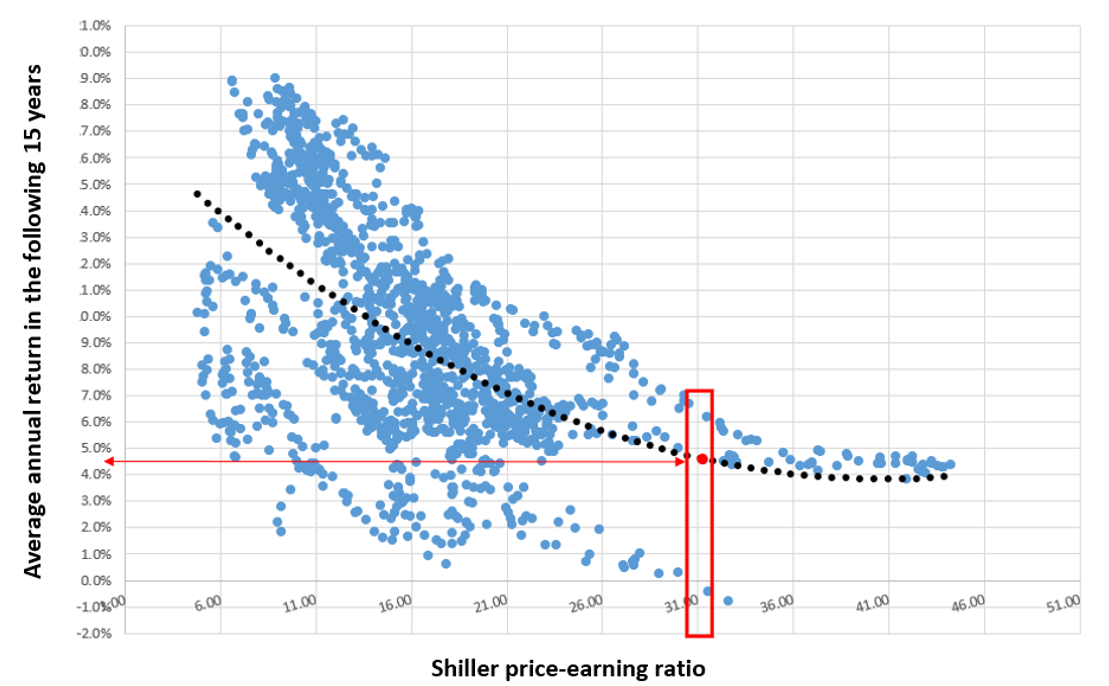 So here are the results. On the horizontal axis, you can see different levels of Shiller's price-earnings ratio. It should be remembered that the higher the ratio, the more expensive the market is. The vertical axis represents the average annual return for the next 15 years. The blue dots represent all observed data and, finally, the black dotted line is the trendline of the graph. So, it is easy to see that the cheaper the market is considered, the higher the returns of the next 15 years, and vice versa.

The following graph compares the price movement of the S&P 500 index with the earnings per share of the companies that make it up. Normally, it makes sense to observe a positive correlation between profit growth and market price. The more companies' profits increase, the more these companies increase in value and the more investors are willing to pay for them. 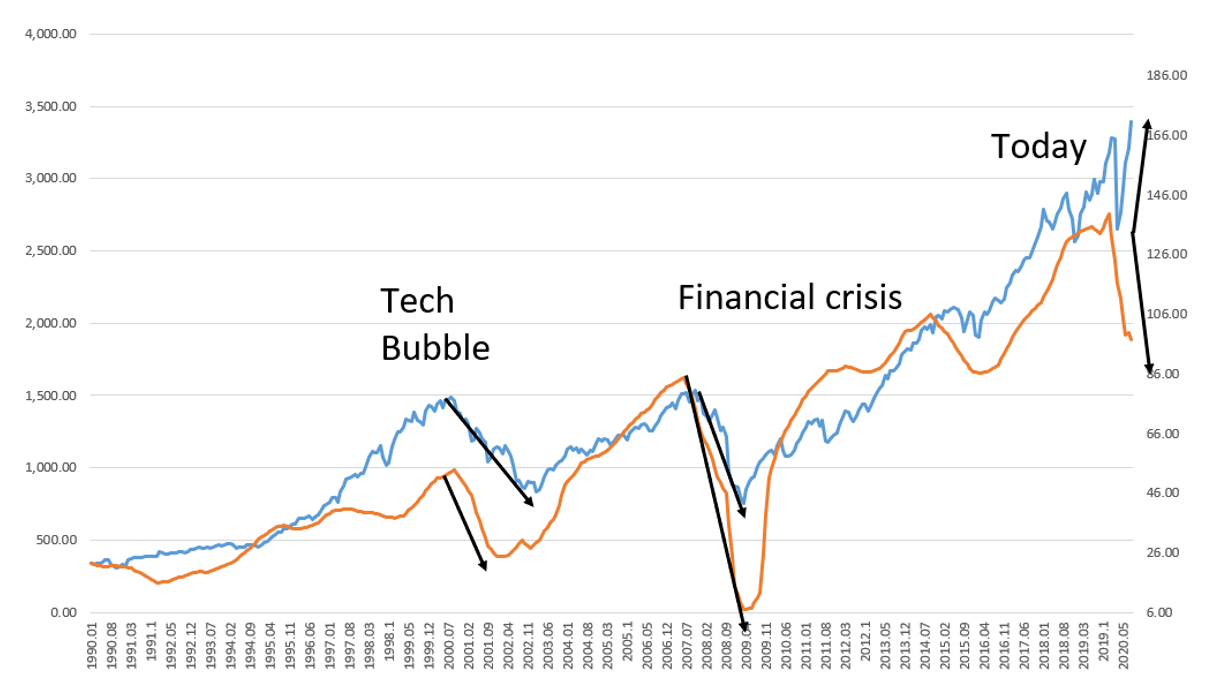 We can observe that in each of the previous major crises, a decrease in profits (orange line) resulted in a decrease in the index price (blue line). During the tech bubble of the 2000s, the profits of the S&P 500 returned to their initial value after four years, while the index price took seven years before returning to the same level. As for the 2008 financial crisis, both profits and the price of the S&P 500 returned to their original values after about four years. In the current situation, we have seen a significant drop in profits since the start of the pandemic and the stock market experienced a marked drop in March in line with this decrease. However, unlike the last two crises, the S&P 500 has regained its value in just a few months and is now priced higher than before the decline! And this time around, this recovery is not accompanied by an equivalent rise in profits, far from it. It is likely that corporate profits will start to rise again, but it is unlikely that this rise will be fast enough to justify the increase in the stock market prices in recent months. 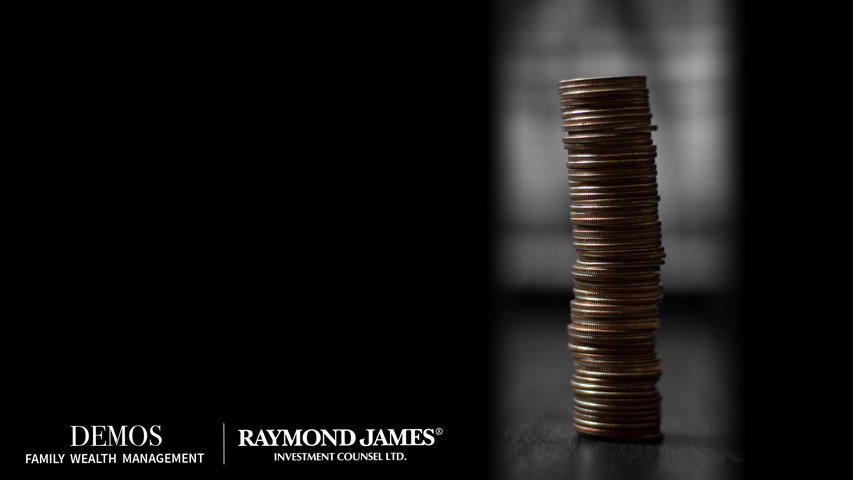